Converting an old Mac Pro into a lockable cabinet. 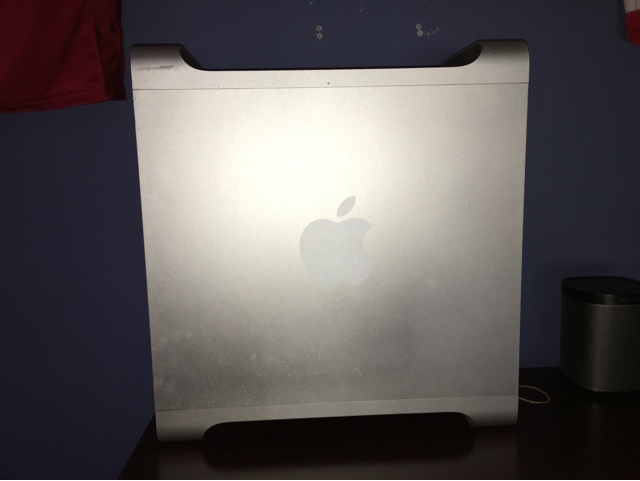 As we were cleaning out our basement, my wife pointed to my old Mac Pro and said "What are you going to do with that?"

Of course it brought back some great memories of when I first got it, It was my first Mac computer. Before then I was just running Linux and BSD on my desktops, but this was Unix with a nice UI over it. I loved my old Mac, but at this point it was little more than a paperweight. I had upgraded it to have 4 big drives in it, added extra ram, but it was still 20 years old. It would never run anything modern and it certainly couldn't be upgraded to the new MacOS.

After doing a little digging, I saw plenty of posts of people using an old Mac Pro as a coffee table, or end-table, but mostly just using two of them to old up a piece of wood. That wasn't enough for me, so I decided to try to turn it into a cabinet, which can be locked using a simple padlock if you wanted to.


The first step was pulling off the cover and removing everything that would just slide out. Graphics cards, Ram cards, and Hard Drives.


The next step was removing the large back fan section. This metal piece just comes right out when you pull on it, it appears to be attached with magnets: 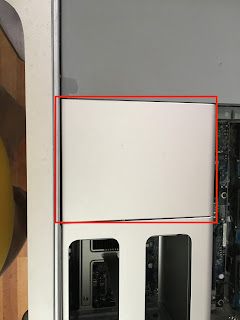 Once that part is out, you can see a few exposed screws, remove these and you're clear to lift out the back fan housing. The first is up by where you took out the hard drive:

Next there is one by where the metal plate came off: 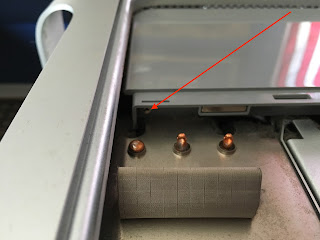 That should be it, you can now lift out the back fan housing unit:

Next, disconnect any cables you see. There's a lot of them: 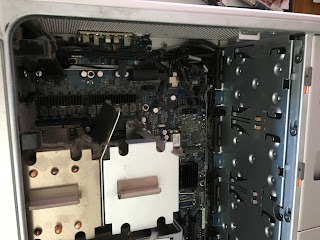 Next step, back to where we pulled out the RAM Cards, it's time to take out this beast. There are four screws on the bottom of the unit, and two tiny screws at the top. As a warning, one of my tiny screws was stripped, so I had to dremel it out. 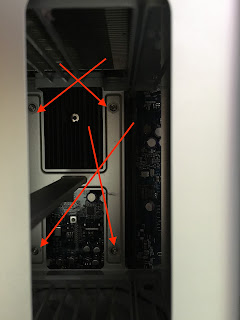 Next, it's time to remove the heat-sinks over the CPUs. Up until this point I was able to avoid breaking things, but after this step there is absolutely no way back. The easiest way to get the vents off is to break the one heat sink off, by rocking it back and forth until the metal snaps off: 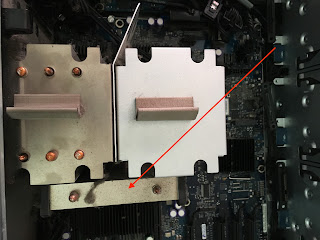 Once it snaps off, you'll see the 8 or so allen screws that you need to remove to pull off the heat sinks. These are spring-loaded, so once you get them mostly loosened you can hand unscrew them.

There's also a small plastic cover to the side of the heat sinks where you pulled out the back fan unit. It has three small screws in it, remove those and pull it out. Yank out all the cables this exposes. 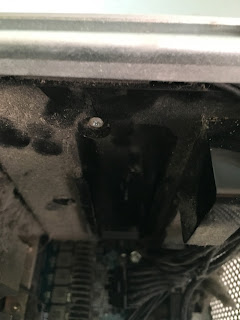 On the other side is another heatsink, where we broke off the metal part, it has a few allen key screws, Remove them and you can pull off this heatsink as well. 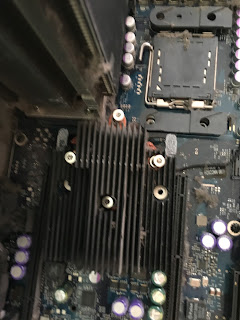 Next up, remove the motherboard screws. There's tons of them. There's also a side logic board where the power button and USB slots are on the front of the case. Be careful here if you wish to preserve the iconic apple power button, there's a small cable connecting it to the logic board you should remove before yanking out the logic board. There's also some screws connecting the ports where the hard-drives slide in. Unscrew those and start yanking out cables. I had to remove some black tape around the cables at the bottom of the case to pull them out of the cable-management system at the bottom.

After a lot of pulling, cutting, twisting, bending, and swearing, I ended up with something like this:

Note that I wasn't able to fully pull out the top enclosures. I still haven't figured out how to remove the power supply, and I ended up breaking the housing for the CD drive because I couldn't quite figure out how to cleanly remove it. I don't recommend breaking that part off though because if you don't do it right the closing mechanism for the door may end up breaking.

In any event, once the guts are all cleaned out, you can add shelving if you want, or just leave it as is and you've got a nice empty cabinet that can easily be closed. I've been thinking about running some LED light strips inside through the open PCI slots.

Tara Root said…
Students hello! Avoid the stress and anxiety of turning in your work after the deadline and https://expertpaperwriter.com/essaytigers-com-review/ pro writers are on standby, ready to take up all your orders. Though the MBA admission essay must seem like a curse you must struggle through, you can take advantage of it and turn it into a gift in which you set yourself apart and impress the school.
April 17, 2022 at 2:01 PM