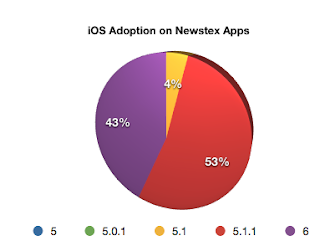 In the wake of the iOS 6 release Wednesday of this week, and the iPhone 5 release today, it's very clear that this is the biggest and most anticipated release from Apple that has happened since the original iPhone. Techcrunch confirmed that over 15% of users updated to using iOS6 within the first 24 hours. At Newstex, our adoption rates are even higher; we already have 43% of our active users running iOS 6.

App developers have been pushing ever since Apple announced the iOS 6 release date to update their apps to support both the iPhone 5 (which simply has a taller screen) and the new OS. While there are only a few changes that you need to do to make your application compatible with these new releases, not making those updates severely limits your total pool of possible users.


It's estimated that apple will sell as many as 10 million iPhone 5 devices before the end of the month. If your application still looks letterboxed within this new, taller iPhone, will users really continue to use your app?

goldyyy said…
We offer top-notch custom paper writing services that will solve all your academic problems with little effort on your side assignment writing. No need to endure the late lights trying to finish up your assignment.
January 23, 2022 at 6:53 AM

Tara Root said…
Hey students, we help you if you write us " write my research paper " - We believe in quality and commitment which makes us so different from our competitors and thus always keeps our customers satisfied.We deal in avariety of essay topics such asScience,History,Literature, Sociology and etc.
April 10, 2022 at 3:08 AM

goldyyy said…
Have the best “write my essay” help on , which is among the Top 10 writing help picks on the internet in buy research paper. Collab with a professional essay writer instructing them to prepare a fully original, plagiarism-free essay that meets all the instructions that you received from your tutor.
June 20, 2022 at 12:47 PM